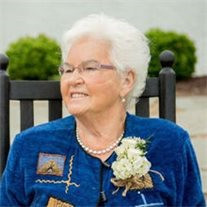 Barbara "Bobbie" (Caldwell) Carper, whose love for life was only surpassed by the love for her family, went home to be with her Lord and Savior Jesus Christ on Friday, June 16, 2017 at the age of 85. A lifelong resident of Craig County, Virginia, Barbara was born in New Castle, Virginia, on July 31, 1931, a daughter of the late Roxie Rowan Caldwell and Paul Jones Caldwell. The bedrock of a close-knit family whose life was a shining example of how much influence one good woman can have in the world. For nearly 86 years, she made a positive impact and influenced everyone with her faith, her heart-warming personality, her generosity, her unbelievable fight against illnesses and her love for her family and friends. She was preceded in death by the love of her life, William "Jr. " Carper, who died in September 1987. Barbara was also preceded in death by nine siblings; Pauline Whiting, Mildred Craft, Kathleen Caldwell, Daisy Parsell, James Caldwell, Howard Caldwell, Jean Myers, Mary Bowles, and Joyce Caldwell. Mama is survived by her three children, who were her pride and joy in life: Jennifer McPherson and her husband, B.B., of New Castle, Virginia, Betty Stimeling of Roanoke, Virginia, and Larry Carper of New Castle, Virginia. Granny is survived by five grandchildren, who she cherished and adored with all her heart: April Messerly and her husband, Bryan, of Morgantown, West Virginia, Sally Stimeling of Charlottesville, Virginia, Ginnie Vaughan and her husband, Jason, of Salem, Virginia, Chad Carper and his wife, Elaina, of New Castle, Virginia, and Logan Poff and her husband, Joe, of Copper Hill, Virginia. G.G. was considerably proud of her four great-grandchildren, who she bragged about on a daily basis: Jameson and Cale Vaughan, and Judd and Carper Messerly. She is also survived by sisters-in-law JoAnne Rock and Peggy Zeffle; as well as many nieces, nephews, and their families. Barbara was a lifelong member of New Castle United Methodist Church. She retired from GE in 1993 with 29 years of service. The family would like to thank all of her caregivers for their love and attention over the years. Memorial contributions may be made to the New Castle United Methodist Church, Mitchell Drive and Route 42, New Castle, VA, 24127. A Memorial Service will be held 7:00 PM Monday, June 19, 2017 at Paitsel Funeral Home, New Castle, Virginia with Pastor Willie Guill officiating. The family will receive friends 5-7 PM Monday before the service. Arrangement by Paitsel Funeral Home.

Barbara "Bobbie" (Caldwell) Carper, whose love for life was only surpassed by the love for her family, went home to be with her Lord and Savior Jesus Christ on Friday, June 16, 2017 at the age of 85. A lifelong resident of Craig County, Virginia,... View Obituary & Service Information

The family of Barbara Ann Carper created this Life Tributes page to make it easy to share your memories.

Barbara &quot;Bobbie&quot; (Caldwell) Carper, whose love for life was only...

Send flowers to the Carper family.