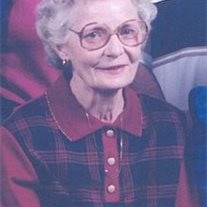 2 Timothy 4:7 I have fought a good fight, I have finished my course, I have kept the faith. Barbara Bower Crawford, 88 of New Castle, VA, found peace June 17, 2014, after an extended period of illness. She was predeceased by husband of 52... View Obituary & Service Information

The family of Barbara Bower Crawford created this Life Tributes page to make it easy to share your memories.

I have fought a good fight, I have finished my...

Send flowers to the Crawford family.