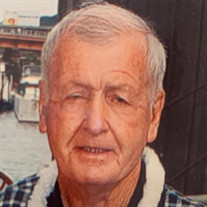 Donald Lanier Via July 14, 1937 – September 24, 2021 Donald Lanier Via (Spike) was called to his Heavenly Home on Friday, September 24, 2021. Don was a Navy Veteran, a wonderful husband, father, and grandfather, and was loved and respected by all who met him. He was active in his church and loved singing in the choir. In his younger years he loved farming and horseback riding. In his later years he enjoyed nothing more than sitting on his carport soaking in the warm sun and enjoying the cool breezes. Don is preceded in death by his parents, Jefferson & Lillie Via; brothers, Warren Via, JD Via Jr. (Cub), Frank Via, Burnell Via (Buddy), Charles Via (Charlie), & Harry Via, sisters Pauline Herrity (Polly), Ruby Craft, Katherine Fields, & Joyce Via, son Dwayne Via, and daughter Lisa Via. Left to cherish his memory are his loving wife of 64 years, Mary Via; son and daughter-in-law, Darren & Tammy Via; sister, Gwen Bostic; grandsons Andrew Via and Ian Hall, and numerous nieces, nephews and friends. The family would like to extend a special thank you to all of the family and friends who have assisted with Don’s care over the last few months. A service to celebrate Don’s life will be held at 1:00 pm on Tuesday, September 28, 2021 at the New Castle United Methodist Church. The family will receive friends at the church at noon on Tuesday. Interment to follow at Hebron United Methodist Church Cemetery. Arrangements by Paitsel Funeral Home. www.paitselfh.com

The family of DONALD LANIER VIA created this Life Tributes page to make it easy to share your memories.

Send flowers to the VIA family.