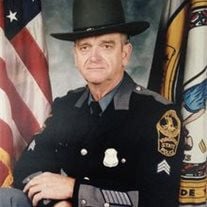 Elvin Glenroy "EG" Moses, 79 of New Castle, went to be with the Lord Wednesday, April 22, 2015. He is preceded in death by his parents Cecil and Layrue Moses. He is survived by his wife, Billie Pyles Moses. He is also survived by his daughter; Brenda and son in law Frank Salinas, daughter Ingrid Moses, son Eric Moses and his friend Zenda Collins, son Alexander and daughter in law Patricia Moses, daughter Malinda Moses, step-daughter Marti and Charles "Jeff" Meade, JR, step-son David Underwood and his fiancé Megan Reedy. Grandchildren are Isabel, Victoria, & Gabriela Salinas, Henry and John Myers, Hunter and Kayla Meade, & Jase Underwood. EG is also survived by his sisters Freda Pearl Smith, Eila Jean & Larry Early and many nieces and nephews. He is also survived by his faithful companion, his Rat Terrier, Otis. EG served as a pilot in the Air Force before joining the Virginia State Police. EG retired at rank of Sergeant after 42 years of distinguished service in the areas of Richmond, Craig County, Culpeper, and Salem. As a State Trooper he was respected by and a mentor to those with whom he worked. EG enjoyed farming at his home in Craig County and cutting wood. EG was an Indian Motorcycle enthusiast. He and his wife raised Rat Terriers and had a love for the breed. EG loved to play the banjo, was a part of a band, and would play a tune for his grandkids, company, and at gatherings. EG loved to entertain with stories of his life experience, he could always hold a crowd captive with his words. EG was a member of Mountain View Baptist Church. Family will receive friends on Sunday, April 26 from 5-7pm at Paitsel Funeral Home in New Castle, VA. Service will be held Monday, April 27th at 10am at Paitsel Funeral Home. Interment will follow at Ross Cemetery. Funeral services will be provided by Paitsel Funeral Home and Virginia State Police. Funeral will be officiated by State Police Chaplin Rick Jarrell and Jim Morris of Mountain View Christian Church. www.paitselfh.com

Elvin Glenroy "EG" Moses, 79 of New Castle, went to be with the Lord Wednesday, April 22, 2015. He is preceded in death by his parents Cecil and Layrue Moses. He is survived by his wife, Billie Pyles Moses. He is also survived by his daughter;... View Obituary & Service Information

The family of Elvin "E.G." Moses created this Life Tributes page to make it easy to share your memories.

Send flowers to the Moses family.