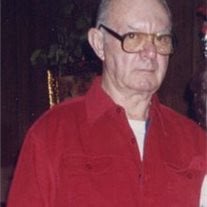 Fred Odell Abbott, Sr. 85 of New Castle went to be with the Lord, Friday, October 19, 2012. He served in the U.S. Navy during WWII. He was a self-employed contractor and an avid sportsman. He thoroughly enjoyed spending time outdoors and on... View Obituary & Service Information

The family of Fred Odell Abbott, Sr. created this Life Tributes page to make it easy to share your memories.

Send flowers to the Abbott, family.