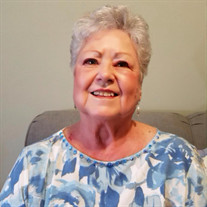 HELDRETH GLYNDA CAROLYN CARPER Glynda Carolyn Carper Heldreth of Salem passed away November 22, 2021 at LewisGale Medical Center. Born April 28, 1938 to Milan Charles (Skip) and Buena Winston (Wincie) Lee Carper, Carolyn was preceded in death by her beloved husband, Claude Edward Heldreth. She was the last remaining of her generation of seven siblings and their spouses: Lyda (Carroll) Richard, Buddy (Verdie) Carper, Wayne (Florence) Carper, Norman (Bonnie) Carper, Jean (Harry) Jehle and Sandra (Charles) Reynolds. Safely ensconced as number six of seven in her large family, she grew up in the small town of New Castle in Craig County, during a gentler period of time, where everyone knew you, and you were related, in some way, to most; when children were free to play and roam and a whole community looked out for you. Classmates she started school with, she graduated with and, though they went their separate ways, were her friends for life. Later in life and with a more worldly view, she felt so lucky to have been part of that time and that small town life. Fittingly, she was crowned Miss Craig County and was proud to represent her corner of the world at the state pageant in Richmond. She lived through the dark times of WWII. Though not understanding it exactly, she knew her older brothers were gone and in danger, and that everyone must do their part, save everything for the war effort...string, gum wrappers, tin cans, newspapers! She saw so much advancement during her lifetime: plastics, man-made fabrics to man-made diamonds, TV, computers, cell phones, space travel, man on the moon, sunscreen. She recalled to her children as a third grader being told about a wonderful new product, a pen that contained its own ink supply. Yes, the ballpoint pen! Carolyn married Claude, a career Marine, in 1955. Together, they traveled, lived, and raised their family in many different states and countries. After retirement to Orlando, FL that love of travel and adventure remained, and they visited many far flung places, but were always glad to come home. They returned to Craig County in 1999 due to Claude’s declining health. Carolyn had a long and happy life and was always truly grateful for the many gifts it had given her. Carolyn was a kidney transplant patient – her donor was her daughter, Lori, whose gift of life gave her many additional healthy, happy, productive years. One of her most endearing and happy memories of her later life was a trip with her children back to Iceland 45+ years after they had lived there as a young family. Though missing the fourth member of their clan, it was special for all, recalling wonderful adventures and memories. Survivors are her two loving children, Steven (Anne) Heldreth of Charlottesville and Dr. Lori (Carl Timothy) McDaniel of Indian Valley; six grandchildren, Nicholas, Sarah and Nathaniel Heldreth and Shannon, Matthew, and Eric McDaniel; nieces Sherry McLain, Charlene Rousseau, Rhonda Macdonald and Elizabeth Huffman, and one nephew, Timothy Reynolds. Services will be held at Paitsel Funeral Home in New Castle on Friday, November 26, 2021 at 1:00 with visitation beginning one hour before the funeral. After the services, internment will be at Fair View Cemetery in Roanoke. The family encourages attendees to wear masks. In lieu of flowers, donations may be made to the UVA Health Foundation, designating the Renal Patient Memorial Fund.

The family of GLYNDA CAROLYN HELDRETH created this Life Tributes page to make it easy to share your memories.

Send flowers to the HELDRETH family.