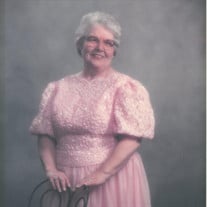 Tripp, Helen Marie Pendleton Helen Marie Pendleton Tripp, 87, of New Castle, Virginia, passed away on Tuesday, July 9, 2019, at her home on Dry Branch Farm. Helen was born September 29, 1931, in Big Island, Virginia, to Frank and Mattie Pendleton. Helen was preceded in death by her beloved husband of 67 years, Norman L. Tripp. She is survived by two sons and their spouses: N. Wayne and Joan V. Tripp and D. Michael and Karen E. Tripp; by her grandchildren and their spouses: Benjamin W. and Anne G. Tripp, Matthew P. and Megan E. Bruening, Craig M. and Jackie P. Tripp, and Kelsey R. Tripp; and her great-granddaughter, Margaret Helen (Maggie) Tripp. Helen is also survived by a sister, Sarah P. Tyree, and a brother, John W. Pendleton. Helen was a devoted wife, mother, grandmother, and great-grandmother. Most of her life she was a homemaker who diligently looked after her family. She put up food from the gardens Norman tended and was a phenomenal cook. She was accomplished at cross stitching, quilting, and crocheting, which she practiced until arthritis prevented her from doing so. For many years she served as a member and Secretary of the Craig County Electoral Board. Helen was also a member and Secretary of the Sunday School of the New Castle United Methodist Church. One of Helen’s greatest passions in life was the Order of the Eastern Star. She was a member of Mountain Chapter No. 168 from 1957 until its merger with Salem Chapter No. 161. Over the 62 years of her membership, she served in numerous leadership roles including three terms as Worthy Matron of Mountain Chapter. She also went “through the chairs” to become Worthy Grand Matron of the Grand Chapter of Virginia in 1992. Helen often said that it was necessary to be “Worthy” before one could be “Grand.” She also conducted innumerable schools and installations of OES officers. Helen’s family wishes to express their sincere gratitude to the doctors, nurses, and staff of Heartland Hospice Care for their kind and caring assistance. The family is especially appreciative of Nurse Lynne Rock, who was both a wonderful caregiver and friend. A celebration of Helen’s life led by Rev. Randall Blankenship with Rev. Melton Johnson of First Baptist Church of Salem assisting will be held at Paitsel Funeral Home in New Castle, Virginia, at 2:00 p.m. on Saturday, July 13. Friends are encouraged to participate in the celebration by sharing a memory of Helen. Interment will follow at Huffman Memorial Park on Virginia Route 42. Visitation will be at Paitsel Funeral Home from 6:00-7:30 p.m. on Friday, July 12, followed by an OES funeral at 7:30 pm.. Flowers will be accepted, and the family encourages donations to the Loaves and Fishes Ministry of New Castle Christian Church c/o Jean Bradley, 130 Marshall Avenue, New Castle, VA 24127.

The family of Helen Marie Tripp created this Life Tributes page to make it easy to share your memories.

Send flowers to the Tripp family.