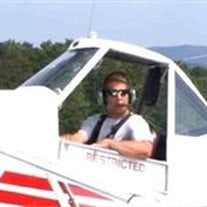 John Edward Semones, 46, passed away March 29, 2015 after successfully fighting cancer for an extended period. John grew up in Pulaski Virginia and later lived and worked around the New River Valley. Since 2008 he has resided in New Castle. Passionate to follow in his Grandfatherâ??s footsteps as an airplane pilot, he accomplished his greatest career achievement by building a successful crop dusting business, Eastern Aerial Applications, which he operated in Morrilton Arkansas. Aside from airplanes and flying, he loved shooting sporting clays, golfing, both water and snow skiing, riding motor cycles, working on cars, scuba diving, soaring, kayaking, bee keeping, music and much more. He loved some great dogs throughout his life. He is preceded in death by his Mother, Sharon Ratcliff, Wytheville. He is survived by: his wife, Cole Frantz Semones; his son, Cody Semones, a student at the University of Georgia; his sister, Jodi Semones, and her husband, Mike Bagarus, Spring Hill, FL and her son, Dylan, who is deceased; his father, Ron Semones, and wife Linda, Clearwater, FL; his uncle and aunt, Mike and Ruth Ratcliff, Claytor Lake; a close cousin, Barry Moore, Pulaski; Coleâ??s parents, Lanier and Thecla Frantz, New Castle and her sister Sloane Frantz Mayberry and her husband Bill, Charlotte, NC. A memorial service will be held at the Waterâ??s Edge facility at Claytor Lake State Park (I-81 Exit 101) on April 2nd at 4 p.m. The family will visit with friends after. In lieu of flowers, contributions may be made to St. Jude Childrenâ??s Hospital, an organization that John admired and supported (www.stjude.org).

John Edward Semones, 46, passed away March 29, 2015 after successfully fighting cancer for an extended period. John grew up in Pulaski Virginia and later lived and worked around the New River Valley. Since 2008 he has resided in New Castle.... View Obituary & Service Information

The family of John Edward Semones created this Life Tributes page to make it easy to share your memories.

Send flowers to the Semones family.