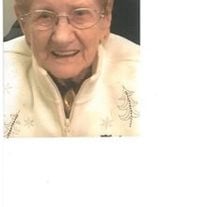 Mable Hallie Via King from Oriskany, VA passed away Saturday, January 21, 2017 at the age of 97. She was preceded in death by her husband of 77 years Alfred S. King, parents; James Thomas Via and Hallie Coleman Via, son; J. Steele King, brothers;... View Obituary & Service Information

The family of Mable King created this Life Tributes page to make it easy to share your memories.

Mable Hallie Via King from Oriskany, VA passed away Saturday,...

Send flowers to the King family.