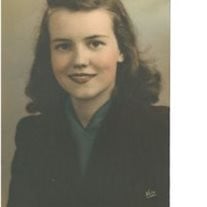 Margaret Penn Worley Estes, age 94, deceased July 21, 2017 Predeceased by her husband, the love of her life, Hugh T. Estes, Jr.; her siblings, Harvey Worley, Jr., Katherine Worley, Annie Legenksy, Clara Alderson, Harriette Abel , Emma Wilkerson, and Ruth Caldwell and nephew Henry Caldwell and great niece Andi Deogracias. She is survived by her nieces Jo India Abel Fahlstedt, Judith Caldwell Ayers, nephews Chester Legensky, Jr., Thomas Legensky, great nieces and nephews, Kim Isley, Nikki Harvey , Heather Nowell, Bryant Francisco, Preston Caldwell, Joseph Caldwell, Tricia Jenkins and many descendant of her nieces and nephews. Margaret was educated in secretarial school in Reidsville, NC., where she worked for a while and then she took the Civil Service Exam, which she passed with flying colors, and worked in the Marine division of the government in Washington, D.C. while her husband, Hugh Thomas, recovered in Walter Reed Hospital from injuries sustained during the Battle of the Bulge. She also played for a church in the Little Washington area and entertained in other venues while there. She and Hugh T. returned home to Craig and settled in the Simmonsville community. When Hugh T. became Treasurer of Craig County, she worked along side of him until his passing. Her entire life, she played the piano for her church, Gravel Hill Christian Church, Disciples of Christ, and in her later years even drove each Sunday from Salem to play. She loved music, singing solos and entertaining in nursing homes, revivals and any place she was called. She even played some in the assisted living homes where she spent her last few years. Margo loved her church, her family , her music, as well as her extended church families and many friends. She lived her life well, her own way, and adjusted gracefully to her later years, over which she had little control. She will be missed but leaves behind a legacy of music, smiles and a love of living that she shared with all. She went home peacefully and gracefully and sings with the angels. If anyone wishes to donate memorials in her honor, she would be delighted if it went to her home church, Gravel Hill, or to the charity of your choice.

The family of Margaret Worley Estes created this Life Tributes page to make it easy to share your memories.

Send flowers to the Estes family.