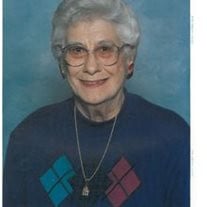 Helen Marie Reynolds Dobyns, 87, of New Castle, Virgina, went home to be with her Lord on Thursday, October 20, 2016. She was preceded in death by her husband, Thomas Mitchell Dobyns, parents, Lester D. and Kate Sizer Reynolds, brother and sister-in-law, Marshall and Virginia Lipes Reynolds, sisters and brothers-in-law, Virginia and Fulton Huffman, Frances and Charles McNiel. She is survived by niece, Dr. Jackie Reynolds Scruggs and Glenn W. Taylor; nephews, Jerry M. Reynolds and Yvonne Walker, David and Diane Reynolds, Don and Rhonda McNiel , Bruce McNiel and Chapman and Joyce Huffman. numerous nephews and nieces, stepdaughters, Theda, (Larry)Gilmore and Diane, (Terry) Blair. Marie grew up on Sugar Maple Road. She lived in the family home that was built in 1850 and she passed away peacefully in the same home. Helen Marie Reynolds was born on June 24, 1929. She attended Maywood School and Radford Women's College (a subsidiary of VPI) graduating in 1950. She taught at Radford High School for several years. When she left Radford High School she had a Ford Fellowship that led to her employment at Time Warner/Silver Burdette. She taught and trained many teachers across the United States. She lead choirs, bands, orchestras, her Bethelites at Bethel United Methodist Church in New Castle, Virginia, and private music students over the years. She taught in several school systems and started bands such as the Craig County High School Band. Her animated style just made the music so much fun that it stayed in people's minds for a long time. Recently she was playing for a funeral of a special friend at her church, and while sitting in the church we noticed that everyone in the church (which was filled) was listening to her play. She was a showmanship piano player and enjoyed every minute of it. Jazz or Opera were all great to her!! Over the years she was a chorus director for American Legion Girls State and Boys State, and influenced many a young person to be the best they could be! She raised thousands of dollars to send students from Craig County to Boys and Girls State over the years. Many of them were very thankful to her for the change this brought to their lives. As a member of The Eastern Star, she was the pianist for Mountain Chapter #168 in New Castle, for many years. She was also a member of Delta Kappa Gamma Teachers Society for Teachers in the Educational System of our state and country. She was a lifetime member Old Bethel United Methodist Church, New Castle, Virginia. Her husband, Tom, led The Virginia Tech Highty Tighties for many years and they entertained the group in their home as often as possible. He and she enjoyed these times very much. Marie was a Breast Cancer Survivor (1967-2016) and was very active in the Craig County Cancer Society Group . Many people were encouraged by her story and were helped by her concern. Thank you to her caregivers Christy, Val, Debbie, Brittany and many others over the years. Thanks also to the Craig County Sherriff's Department, Chuck and Marge Harris and Marge Lewter, The Rescue Squad, her Church, and neighbors. In lieu of Flowers donations may be made to Old Bethel United Methodist Church, Simmonsville Fire Department, Craig County Rescue Squad, American Legion Boys and Girls State, or the charity of your choice. Funeral services will be held 11:00 am Monday, October 24, 2016 at Old Bethel United Methodist Church with Pastor Willie Guill officiating. Interment will follow at Old Dublin Cemetery in Dublin, VA. The family will receive friends from 4-7 pm Sunday, October 23, 2016 at Paitsel Funeral Home, New Castle, VA. www.paitselfh.com

Helen Marie Reynolds Dobyns, 87, of New Castle, Virgina, went home to be with her Lord on Thursday, October 20, 2016. She was preceded in death by her husband, Thomas Mitchell Dobyns, parents, Lester D. and Kate Sizer Reynolds, brother and sister-in-law,... View Obituary & Service Information

The family of Marie Reynolds Dobyns created this Life Tributes page to make it easy to share your memories.

Send flowers to the Dobyns family.