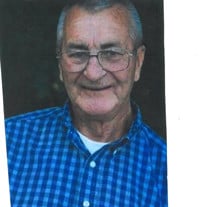 Robert Brillhart Reynolds 9-25-1936 to 8-29-2018 Robert Brillhart Reynolds left his earthly home for his journey to his eternal home on August 29, 2018. He was born September 25, 1936 in Craig County, the first son of Clarence and Kathleen Reynolds. He was preceded in death by his parents and his siblings Martha Reynolds Jennings and William (Billy) C. Reynolds. He was a lifelong resident of Craig Co. He served his country in the US Army. He was a dedicated employee of Salem Frame Company (Rowe), having worked there for sixty years, which was a record for Rowe employees. He retired on August 4, 2018, after a recent illness. He leaves to cherish his memory, his wife and soulmate of forty-six years Lillie Tennessee Reynolds. Also, the family he chose to call his own to love and be loved in return: Sons: Randy Vass and Richard Vass; Daughters: Nancy Vass Surface (Tommy), Elaine Vass Alley, all of Craig County. Grandsons: Jerry Vass, Joseph Vass. Granddaughters: Nicole Alley Dudley (Graham), Rebecca Alley, Morgan Vass Ouellette (Josh), Allison Vass, all of Craig County. Christine Surface of Los Angeles, CA. Great-grandchildren: Dylan Vass, Tyler Vass, Remington Vass, Brantley Niday (Vass), Mason Ouellette, Regan Ouellette, Alexis Abbott (Vass); and many nieces and nephews including special nieces: Faith Hallock of Lakeland, FL and Elizabeth Mae Bradford of Craig Co.; sister-in-law Eleanor Day, Tazewell, VA; brother-in-law Joseph Turrage of FL. Robert was a devoted husband, father, grandfather, and great-great-grandfather, always ready and willing to help, never too busy to stop and lend a hand to anyone in a time of need. He was always looking forward to spending time with family, giving rides on the mower to the little ones, bring home cookies and being called “Pappa, the cookie man”. He loved the country life, and going hunting in the fall and working on small engines, along with listening to country and gospel music. He was always busy at something. He was content and happy in his life. His day began at four am and he was usually humming his favorite hymn, “Amazing Grace”, as he looked forward to another day of work or seeing what all he could accomplish that day. He will be missed by all who knew him, but grieve not for the time has come for him to go rest high on that mountain, and to listen to the Angels sing his favorite songs. Now he can rest and be at peace with no more pain. In lieu of flowers, please make a donation to the Craig Co. Rescue Squad, Fire Department, or your favorite charity. A Private Service for the family will be officiated by Rev. Raymond Christian.

The family of Robert Brillhart Reynolds created this Life Tributes page to make it easy to share your memories.

Send flowers to the Reynolds family.